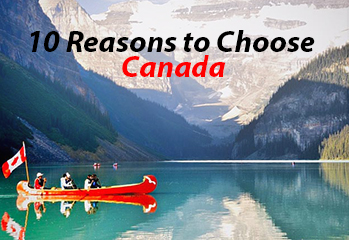 Canada is the world’s second largest country (by area) with 36.5 million people residing in its 10 provinces and 3 territories.

In addition to being ranked 9th in the United Nations (UN) quality of life ranking in 2016, Canada has ranked 9th out of 200 countries in the UN’s annual Human Development Index (HDI). Furthermore, out of 140 cities evaluated for the most livable cities in the world by The Economist Intelligence Unit (EIU); Vancouver, Toronto and Calgary (all cities in Canada) were among the top five.

Canada provides state-funded healthcare facilities that enable people from all walks of life to have access to quality healthcare without worrying about paying heavy fees. Plus, if you are a Canadian citizen or a permanent resident, basic healthcare is completely free of cost!

Canada has strict gun laws, it is not only illegal to own handguns but only one-third of the population have a license to carry firearms – it is no wonder Canada was named the World’s most peaceful country in 2007 by The Economist. Additionally, the Legatum Global Prosperity Index (2016) has ranked Canada #2 in the world in personal freedom that measures the national progress towards basic legal rights, individual freedoms, and social tolerance.

Since mid-2016, Canada’s economy has grown at a 4.3 per cent annual rate. Based on data from the World Bank and the International Monetary Fund, according to Business Insider, Canada ranks 20th out of the top 25 richest countries in the world with a GDP per capita of $45,981. Canada is also one of the most powerful countries in the world as it is a member of the G8 and Canada is one of the top Organization for Economic Co-operation and Development (OECD) countries in spending on public postsecondary education.

Canada has a fast-track system for immigration called Express-Entry for skilled workers. The skills of the applicants are ranked on their specific talents and job prospects through the Comprehensive Ranking System (CRS) – the applicants with the highest ranking are offered permanent residency. 30 draws and up to 70,000 invitations with CRS scores below 450 are expected to be issued in 2017 for the Canadian immigration authorities to meet this year’s targeted annual immigration levels.

Approximately 20% of Canada’s 35 million people are from a foreign land, which makes Canada one of the world’s most multicultural countries. The diversity in Canada makes settling easier for immigrants as it plays a vital role in forming the tolerant and welcoming attitude of the government and people of Canada. The Legatum Global Prosperity Index (2016) revealed that Canada ranks 3rd out of 148 nations in the Social Capital sub-index which measures the strength of personal relationships, social network support, social norms and civic participation in a country.

Furthermore, Canada has many immigrant-serving organizations to help newcomers settle in. These organizations are funded by the government and their services are free. They are excellent sources of information and guidance. They also provide assistance with finding a job, finding accommodation, obtaining official government documents, learning English and/or French and obtaining other professional and/or educational qualifications.

Canada is home to an excellent education system hence providing quality education to its residents. Canada provides both public and private education systems. The public schools are funded by the government and are free for students till 12th Grade. Canada is also equipped with public colleges and universities where students pay tuition that is substantially less than private colleges and universities. Some of the top Universities in the world like McGill University, University of British Columbia and University of Toronto are in Canada.

The Legatum Global Prosperity Index (2016) has ranked Canada 3rd out of 149 nations in Business Environment. The Business Environment sub-index measures a country’s entrepreneurial environment including its business infrastructure, barriers to innovation and labour market flexibility. This ranking indicates that there are great employment opportunities available in Canada for people from all walks of life.

Canada has some of the most beautiful scenery in the world – Niagara Falls in Ontario; Banff National Park in Alberta; Prince Edward Island; Quebec’s Laurentian Mountains; and the Capilano River area in British Columbia.

Trudeau was elected the 23rd Prime Minister of Canada in October 2015. Since he was appointed, Trudeau has welcomed more than 28,000 Syrian refugees to Canada. He appointed Canada’s first ever gender balanced cabinet and lowered taxes for the middle class. Justin Trudeau represents Canada, and therefore his personality and actions are indicative of the amicable, tolerant and empathetic characteristics of Canada.

4 thoughts on “10 Reasons to Choose Canada”