Provincial Nominee Program or PNP is a pathway for Canada immigration being run by the provincial governments and the federal government of Canada. It was introduced in the year 1998 and focuses on meeting the labour and demographic needs of any particular province. It also aims to bring in foreign workers with the occupations skills that are in demand in Canada.

Each PNP has different immigration categories and streams, based on the specific labour market and demographic needs of that particular province. The application process is also different for different PNPs. The PNPs also have a score-based selection system and they conduct regular draws to select eligible candidates. Often, draws are also conducted by PNPs to select candidates who have work experience in occupations that are on high demand in that particular province at that particular time. So the candidates need to select the right Provincial Nominee Program for them based on their qualifications and preferences.

How to Apply for PNP?

In order to migrate to Canada through Provincial Nominee Program, you need to receive a nomination for permanent residence in Canada from a province or territory. The steps involved in obtaining a provincial nomination are as follows:

1. Choose and apply to the PNP of the province or territory where you want to settle.

2. If you meet the skills, education, work experience and other requirements and demonstrate your ability to support yourself and your family once you settle in that province or territory, your application will be accepted.

3. The province or territory will select you based on their assessment whether you are able to meet their economic or labour market needs.

4. Once selected, you will be invited to apply for a provincial nomination in one of the Provincial Nominee Program draws conducted by the province or territory.

5. Upon receiving the provincial nomination, you may apply for permanent residence in Canada within the given time period. 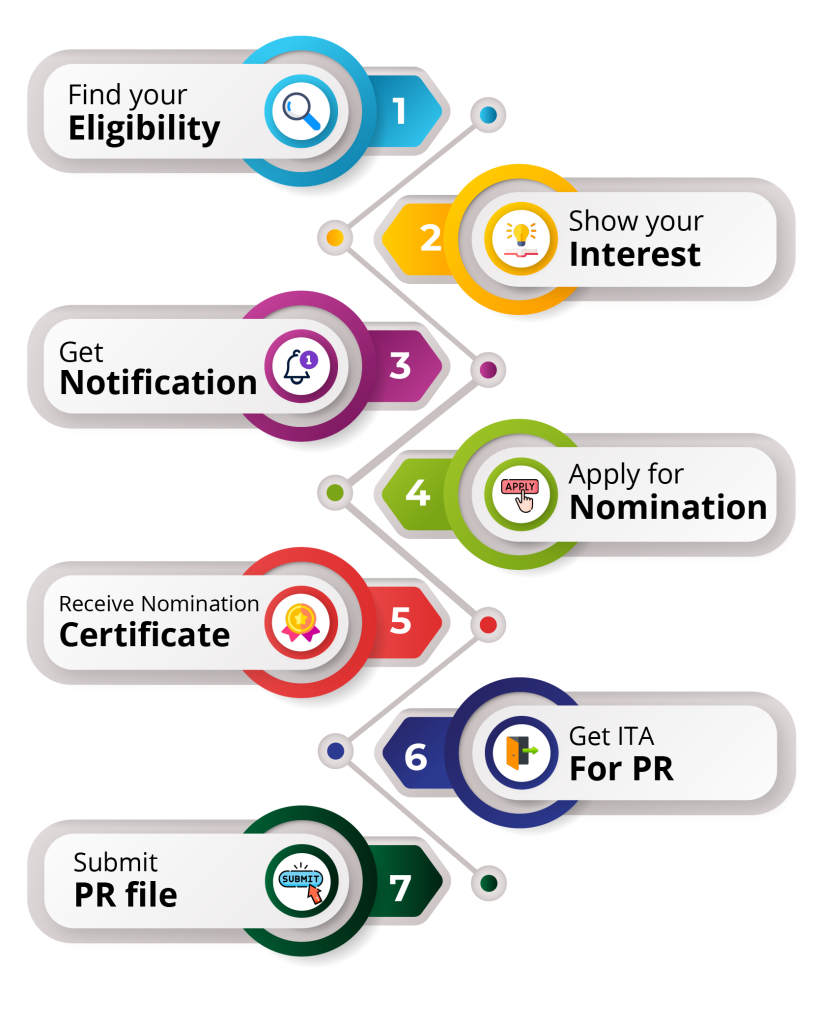 To apply for permanent residence in Canada as a provincial nominee, you must have obtained provincial nomination from one of the provinces or territories of Canada. The eligibility requirements for obtaining a provincial nomination are different for different PNPs. The advantage of Provincial Nominee Program is that even those candidates who cannot earn enough Comprehensive Ranking System(CRS) score points to be selected in a federal Express Entry draw may obtain Canada PR. As far as Express Entry-aligned PNP pathways are concerned, the nominated candidates will receive an additional 600 CRS score points. It means, they will have a better chance for receiving an Invitation to Apply(ITA) for permanent residence in Canada from the Immigration, Refugees and Citizenship Canada(IRCC) in a subsequent Express Entry draw. Some PNP programs select immigration candidates based on their occupation and language proficiency, especially in French. So, by choosing the right PNP program, a candidate can easily realise their dream of obtaining a Canada PR.

How many PNPs are there to migrate to Canada?

As we know, Canada has 10 provinces and 3 territories. Each province and territory has its own PNP Program for immigration. The eligibility criteria and application process are different for each of these PNPs. A list of Canada’s Provincial Nomination Programs are as follows:

Alberta Advantage Immigration Program, earlier known as the Alberta Immigrant Nominee Program, allows foreign workers with the skills and work experience that are in demand in the province, to obtain a nomination for permanent residence in Canada. To be eligible to apply for a provincial nomination from Alberta, a candidate must also prove that they are able to provide for their families. Once the candidate obtains the nomination, they can apply for Canada PR, either individually or with their spouse or common-law partner and dependent children.

The British Columbia Provincial Nominee Program or BC PNP helps those who wish to settle in this westernmost province of Canada, obtain Canada PR. With fast-tracked processing of applications, the Provincial Nominee Program of British Columbia attracts foreign workers who have the skills and work experience that are in high demand in the province. Faster processing times is one advantage of BC PNP is the compared to other immigration programs of Canada.

Manitoba was the first Canadian province to launch a Provincial Nominee Program in 1998. Ever since its launch, the Manitoba PNP has helped the province to grow its economy through immigration, by attracting foreign workers with the skills that are of high demand. Currently, Manitoba welcomes 5000 new permanent residents every year and it is one of the favourite destinations for newcomers. According to recent data, more than 90 per cent of the newcomers to the province land in a job within the first year of their arrival. Also, 90 per cent of the newcomers choose to settle in the province permanently.

Through the New Brunswick Provincial Nominee Program (NBPNP) the province welcomes foreign skilled workers who are willing to settle here and contribute towards its economy. Excellent job opportunities and low cost of living are the two major factors that attract immigrants to this Maritime Province. Those skilled workers who wish to settle in New Brunswick have five immigration pathways under the NBPNP to choose from.

Nova Scotia is one of the Atlantic Provinces of Canada. It comprises the Nova Scotia peninsula, Cape Breton Island and thousands of other small islands. Nova Scotia is known for high living standards, beautiful coasts and an incredible cuisine.
The Nova Scotia Nominee Program (NSNP) focuses on bringing in prospective immigrants who possess the right skills and experience to contribute to the economic growth of the province and tackle demographic challenges.

The OINP program facilitates the Canadian immigration process of managerial, professional and skilled workers and international students who aspire to become permanent residents of Canada. OINP operates 3 streams, under which candidates can apply for nomination.

The Saskatchewan Immigrant Nominee Program was launched in 1998. The province is one of the popular destinations for newcomers to settle in Canada. Every year, Saskatchewan welcomes between 3000 and 4000 newcomers. Newcomers have a high rate of employment in the province, around 76 per cent. The province is also highly successful in retaining newcomers, with around 85 per cent of the new immigrants choosing to settle here. As the Saskatchewan PNP offers various immigration pathways, it is also called the easy PNP.

Are you longing to get Canada PR? We got you. CanApprove is doing its best in providing Canada, Australia and Poland immigration services. Our expert immigration coordinators are just a click away. Talk with them and start your immigration process right now!

Just a few steps to get it started!