5 Benefits of Migrating under Immigrant Investor Program of Canada 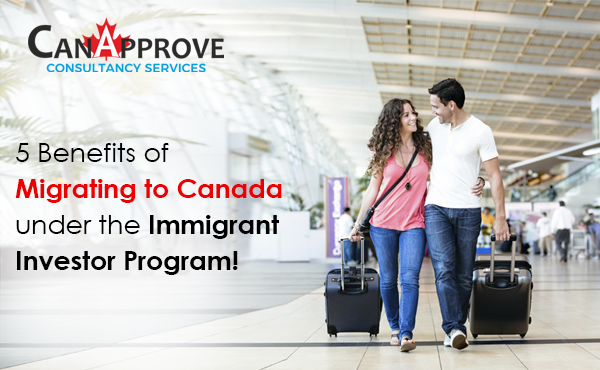 Immigrant Investor Program of Canada aims to attract experienced business people from across the world to settle in the country so that they would contribute to the growth of Canadian economy. The immigrant investors, who meet the criteria for the Immigrant Investor Program, along with their family members, can obtain permanent residence in Canada.

Persons who have owned and operated a qualifying business or managed staff of at least 5 employees can apply for the Canadian Immigrant Investor Program. The investor must have a minimum net worth of CAD 1,600,000 and make an investment of CAD 800,000 to the Government of Canada.  This amount is guaranteed and will be returned to the investor after five years without interest. The government will use this amount to create new jobs.

Now let's explore the five major benefits of migrating to Canada under the Immigrant Investor Program:

Canada is politically a very stable country. It has a parliamentary democracy system and has its own social and political institutions. It also has an excellent social safety system to protect its citizens from financial inequities. The country's budget deficit, as well as the balance-of payments deficit, is very moderate. It means the investors won’t have to worry about the safety of their investment.

Canada has the 11th largest economy in the world, based on the nominal Gross Domestic Product. The country is a member of both the Organization for Economic Cooperation and G7.  Canada has a sound monetary policy and as a result, inflation risk is very low in the country. The Canadian economy is much less volatile compared to the US. The global financial crises in the recent years could only make a minor impact on Canadian economy. A strong economy also means a better chance to make profit for investors.

Good trading relations with other countries:

Canada has good trading relations with other countries. Canada's most important trading partners are the United States, China, and Mexico. The country has free-trade agreements with Europe and India and is gaining access to emerging markets. In short Canadian products have a strong global market which benefits the investors.

Service sector is one of the most prominent industry sectors in Canada. The other major industries are oil and gas and mining, which are showcasing a promising growth. Tourism, technology, film, television and entertainment industries also record significant growth in Canada.

Canada offers the best social benefits to its residents and citizens. Free and standard healthcare, free public school education and pensions after retirement are some of the benefits that they enjoy. Moreover, Canadian citizens can travel to almost 150 countries without a visa.

Contact us for more information on Canada Immigrant Investor Program